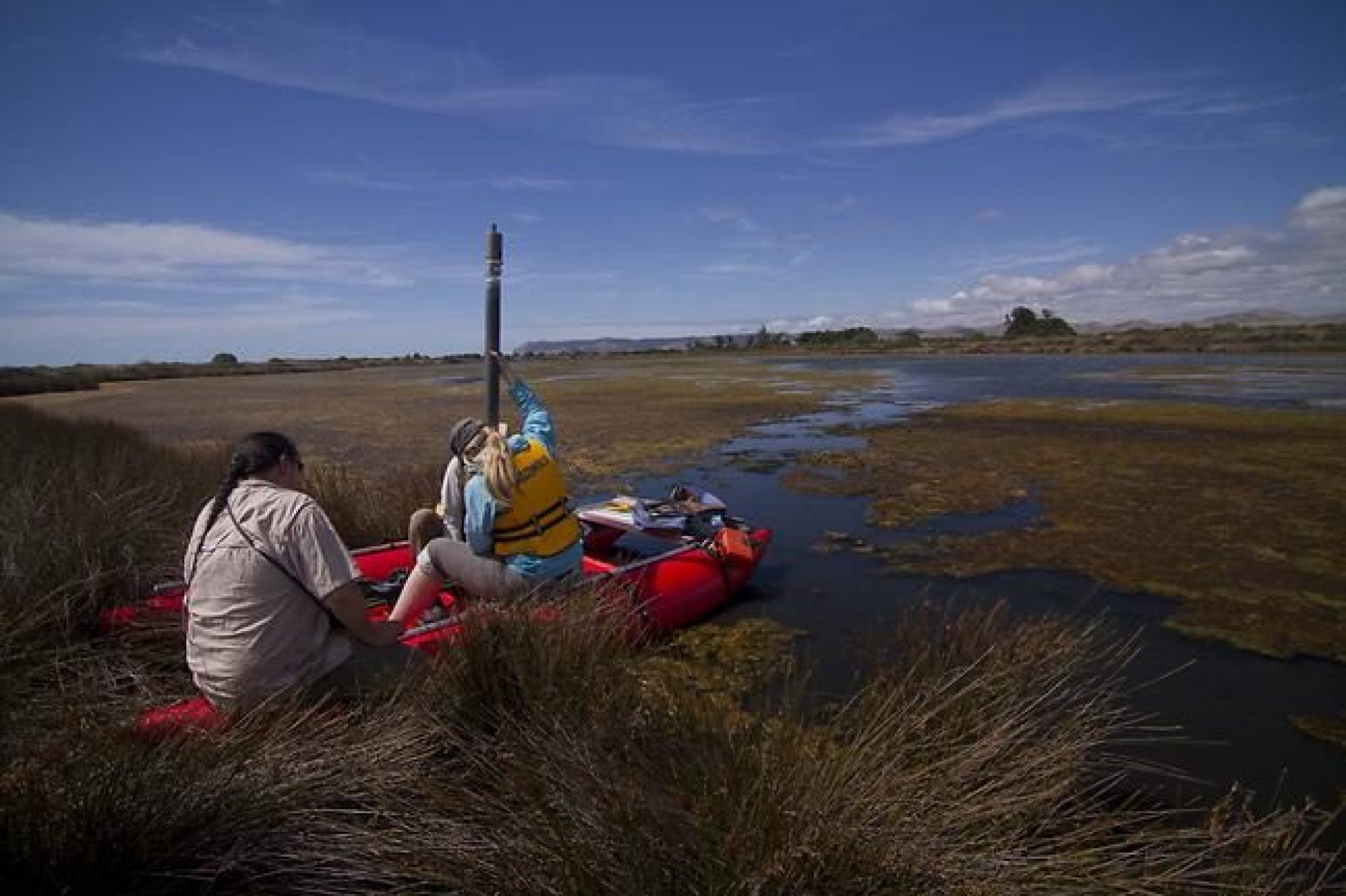 WildFIRE PIRE research includes a portfolio of PIRE-supported and leveraged partnership projects in Tasmania, Australia, New Zealand, Patagonia, and the western US. These efforts are documented in the science plan.

We seek to advance science on fire-climate linkages across multiple temporal and spatial scales; human-set fires and their consequences; fuels, fire behavior and ecosystem recovery; and invasive species and disturbance interactions. Through modeling and data-model comparisons, our goal is to develop new approaches for understanding wildfire in the past and in the future. 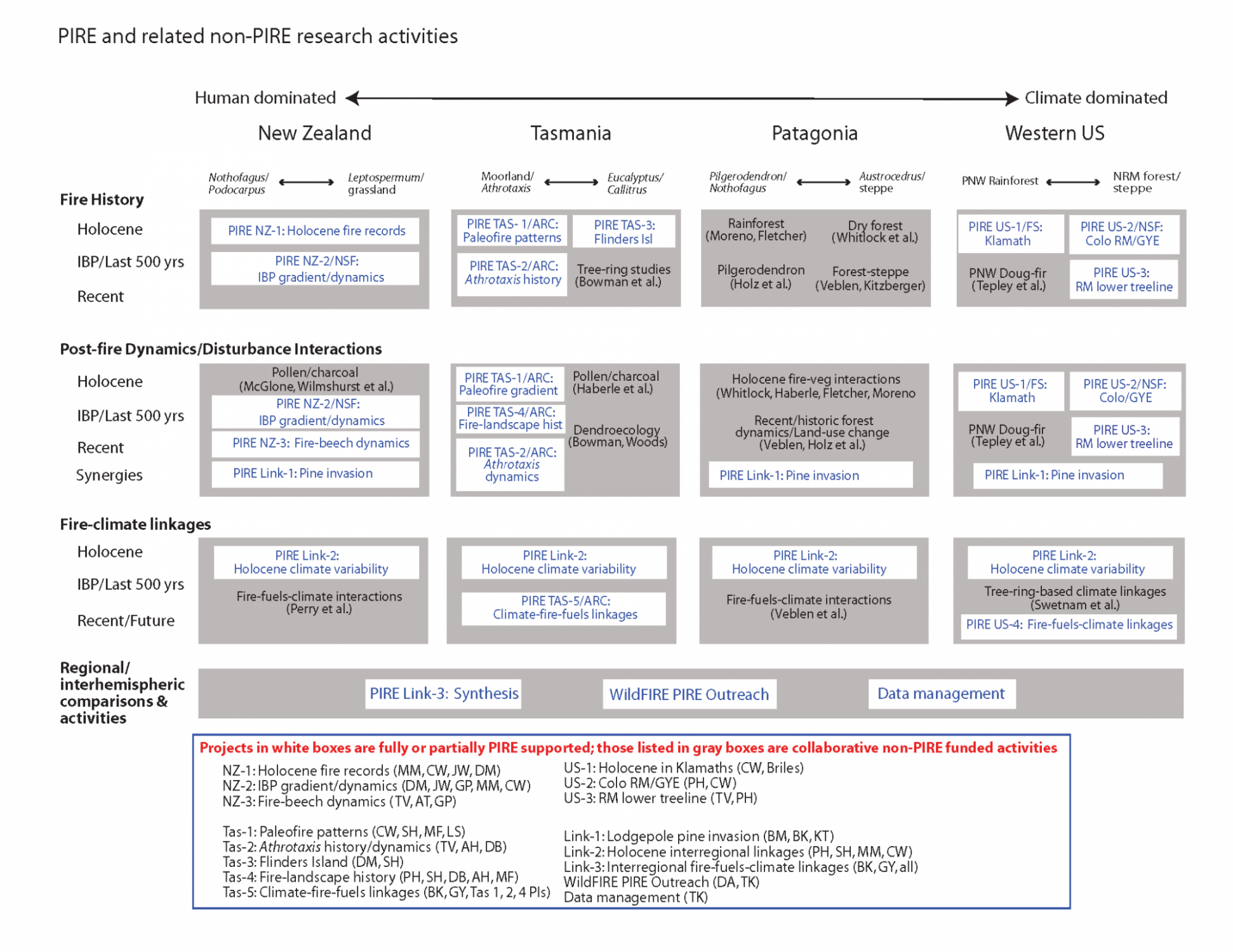 In New Zealand, human-set fires have been responsible for irreversible changes in vegetation during the last millennium in the relative absence of strong climate variations. Fires were extremely rare in NZ prior to Māori arrival 700 years ago, occurring once every 1-2 millennia in most areas. In the absence of fire, the native flora was poorly adapted to fire’s introduction. Charcoal and pollen data from lakes in remote settings indicate near-absence of fire prior to Māori arrival followed by a few decades of high-severity fires. This "Initial Burning Period" (IBP, between 700 and 500 years ago depending on location) was a short but significant deforestation event in the history of each watershed, accompanied by a dramatic transformation in vegetation, slope stability, and limnology. At some sites, the watersheds and the native forests they supported still have not recovered. NZ falls at the far end of the spectrum of landscapes that have been altered by humans and is the rare place where we can precisely isolate human influences on fire risk and fire hazard. Tree-ring derived climate data spanning the last 2000 years in New Zealand suggest only minor climate fluctuations during the IBP that may have amplified or reinforced the success of anthropogenic burning. The relationship between changes in long-term climate, vegetation, and forest structure suggests that beech (Nothofagus) forests were generally expanding during late-Holocene cooling, prior to Māori arrival. Archeological data for the last millennia indicate that Māori presence on the South Island of NZ was generally transient except for semipermanent settlements in coastal areas, and we will determine if settlement sites and trade routes explain particular burning patterns.

In the last century, invasive non-native plant species, such as gorse (Ulex europaeus) and non-native conifer escapement from forestry plantations have influenced current fire regimes beyond the historical range of fire variability, but little is known about the feedbacks between land-use, non-native species, and fire regimes. Stand-age dynamics of native forest patches are also needed to determine whether they are remnants from European-set fires in the last few centuries, and whether they are expanding or contracting at present. The history of these forest remnants, which support much of the native biodiversity, and their relation to fire is a critical need.

Recent large, deadly bushfires during the “Big Dry” in southeastern Australia figure prominently in the Australian Government’s conclusion that climate change is occurring faster and has more serious consequences than previously believed. The same report notes that the link between climate change and bushfires is multi-faceted and complex because bushfires are influenced by many factors including the amount and condition of the fuel load, land-cover patterns, non-native plant invasions, extreme weather events, ignition sources, and management practices. Tasmania is an ideal area for examining human and climate influences on wildfire activity because (a) the landscape is made up of a mosaic of fire sensitive vs. highly fire tolerant plant communities, and it displays strong east-west contrasts in the history of European settlement and current land-use patterns, (b) long-lived (1000 years) trees with proven dendrochronological potential can yield annual-resolution tree-ring fire histories, (c) numerous small lakes offer the potential for high resolution charcoal records, and work can be tied to previous and ongoing paleoecological investigations, (d) previous research provides a broad understanding of vegetation responses to recent and past fire and climate variations and land-use history, and (e) Tasmania is but one area of interest for our Australian colleagues and their work in other Australian settings invite comparison and extend our reach.

In 1968, W.D. Jackson proposed a comprehensive model of how Tasmanian vegetation types, fire frequency and soil fertility interacted in a complex system of feedback loops, resulting in self-reinforcing vegetation patterns. This theory profoundly influenced the subsequent course of fire ecological research far beyond Tasmania. In WildFIRE PIRE, we will examine aspects of Jackson’s theory that are fundamental to predicting how vegetation will respond to future climate-induced changes in fire activity. Fire is considered a primary driver of vegetation dynamics in Tasmania. Tree-ring and lake-sediment fire-history research has not previously been conducted in Tasmania. Climate-vegetation linkages can be studied on multiple temporal and spatial scales and across scales.

WildFIRE PIRE research in Tasmania seeks to develop a network of sedimentary charcoal and tree-ring fire records over the past 10,000 years. It will also link with research underway investigating human-fire-climate linkages in temperate and tropical Australia. Our specific contribution will be to:

The Greater Yellowstone Ecosystem and the Colorado Rockies enhance the international component of WildFIRE PIRE, because they extend the gradients of climate and land-use, span a range of fire regimes, and utilize extensive ongoing research on climate-fire-human linkages.

Land-use gradients range from wildland reserves at high elevations to ex-urban development, logging, and grazing at middle elevations, to irrigated agriculture and growing communities at lower treeline. Hunter-gatherers occupied the Rocky Mountain region for at least 12,000 years, but unlike NZ and Tasmania, the extent and impacts of deliberate burning are geographically unclear.

Catastrophic fires are projected to increase in both areas with future climate and land-use change. Forests are currently under attack by native bark beetles and budworm and non-native blister rust, and large tracks of dead and dying conifers are altering fuel conditions and raising major management concerns. Likewise, invasive grasses and forbs have increased in density and spatial extent at all elevations. The life history of many non-native grasses (e.g., Bromus tectorum and Taeniatherum caputmedusae) has changed the timing of the fire season and the success of ignitions, and increased fire frequency has created feedbacks that perpetuate annual invasive plants and decrease native perennial plant reproduction and survival.

In the western U.S. regions, we will examine: