As part of a statewide effort to advance research and education in water quality, three Montana State University research teams have won funding for projects that could lead to more affordable water monitoring, new treatment methods and better understanding of contamination sources.

The roughly $50,000 "seed" grants were awarded to the MSU teams in December through the Consortium for Research on Environmental Water Systems, or CREWS, which received $20 million from the National Science Foundation earlier in 2019. The CREWS Research Seed Award Program is designed to fund innovative research related to water quality and build research capacity across Montana’s higher education institutions, according to MSU's Todd Kipfer, associate director of the project.

"These are three fantastic projects," Kipfer said. "We had a lot of strong proposals, and these projects really showcase MSU's strengths in water quality research."

Warnat will draw from his experience in electrical engineering and material science to develop a new, more affordable micro-sensor technology for measuring water quality in streams and soils. The standard equipment used to gather a suite of water quality data is often prohibitively expensive, he said. By engineering smaller, cheaper sensors that measure individual water properties and then integrating them with electronics, "we think we can manufacture these sensors at a much lower cost," he said.

According to Warnat, bringing down the cost would allow multiple sensors to be used with each device, so that researchers could more easily measure water quality across multiple soil locations, for instance. Using multiple, redundant sensors would also improve the reliability of the equipment in the field. The seed grant provides an opportunity to prove the concept of the technology, which could lead to additional funding for refining the accuracy of the sensors, he said.

Espinosa-Ortiz is leading a team of Center for Biofilm Engineering researchers that will develop and test new biofilms for treating water contaminants commonly associated with coal mining. Some biofilms — or slimy mats formed by interacting communities of bacteria and fungi — are known for their ability to transform selenium, nitrate and sulfate into less harmful compounds. Espinosa-Ortiz's team will attempt to isolate new bacteria and fungi from streams and soils and compare their treatment abilities with known biofilms in the lab.

Espinosa-Ortiz said that previous work has focused on using various bacteria-dominated biofilms to treat selenium, nitrate and sulfate individually, but that the team's explorations could produce biofilms that are more effective at treating the contaminants together. "We think there is a lot more potential for using fungi," she said. The researchers will also analyze which genes are turned on when the biofilms form, which could help refine treatment methods. The team includes Robin Gerlach and Brent Peyton, professors in the Department of Chemical and Biological Engineering; Ellen Lauchnor, assistant professor in the Department of Civil Engineering; and Rebecca Mueller, research assistant professor in the Center for Biofilm Engineering.

Dore, working with Eric Boyd, associate professor in the Department of Microbiology and Immunology in MSU's College of Agriculture, will explore a new theory on the origins of mercury detected in wildlife of the Upper Clark Fork River below its confluence with Flint Creek. By sampling water and particulates in Georgetown Lake, which sits in the upper reaches of the Flint Creek watershed, the researchers hope to learn whether microorganisms in the reservoir are converting inorganic mercury from old gold and silver mines into an organic form called methylmercury that is more easily absorbed by body tissues when ingested. Maria Clara Fernandes-Martins, graduate student in the Molecular Biosciences program, will identify and quantify the responsible microbes through analysis of their DNA.

Dore said microbes produce methylmercury in oxygen-depleted conditions, such as those are common in Georgetown Lake in winter, when ice cover allows oxygen to be completely consumed in its deeper waters. The dam at Georgetown Lake drains water from near the reservoir's bottom, potentially delivering methylmercury produced in the low-oxygen bottom waters downstream, where it could enter the food web.

"Accumulation of methylmercury is a particular concern for top predators,” like osprey, whose diet is primarily fish, Dore said. Montana's interagency sport fish consumption guidelines for the Upper Clark Fork River and Flint Creek acknowledge the presence of mercury and recommend limits to dietary fish intake. "There's so little that's actually known about how mercury makes its way from mines into the ecosystem, and greater understanding of these mechanisms may lead to improved strategies for mitigation of the potential hazard," Dore said.

The three MSU projects were among seven selected for CREWS seed grants in the research category. A total of 14 projects, including for workforce development and tribal college programs, were selected from 30 proposals submitted statewide. MSU's Office of Research, Economic Development and Graduate Education contributed supporting funds for the MSU research projects. CREWS is a partnership between MSU, the University of Montana, Montana Tech, Salish Kootenai College and Little Big Horn College. CREWS is an RII Track-1 project of NSF's Established Program to Stimulate Competitive Research, or EPSCoR, (OIA- 1757351). 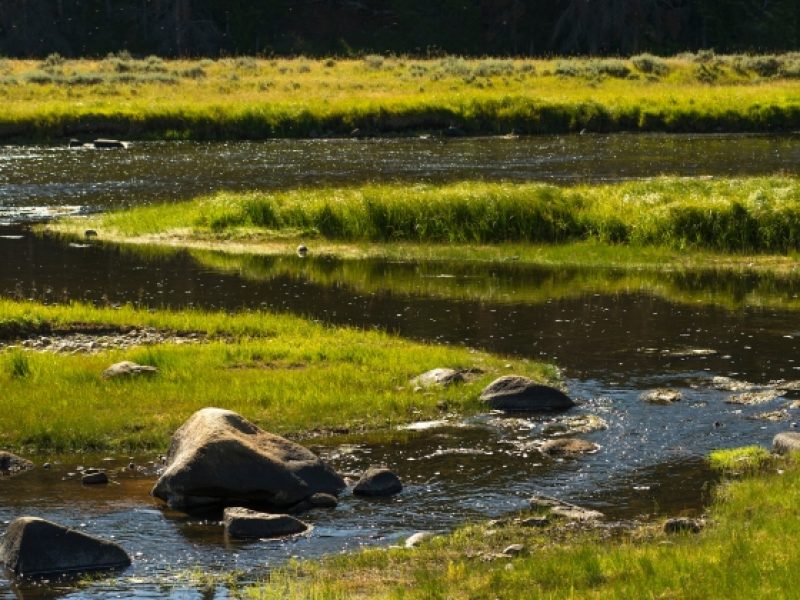