A member of Montana State University’s spring class of 2020 has been recognized for her contributions to the field of weed science during her undergraduate career.

Stacey Robbins, who graduated from the College of Agriculture’s Department of Land Resources and Environmental Sciences earlier this month, was one of just nine students to receive the John Jachetta Undergraduate Research Award from the Weed Science Society of America. The nonprofit society promotes research, outreach and education regarding weed science and management nationwide, from undergraduate projects such as Robbins’ to faculty and community work.

“The whole experience has been pretty exciting for me,” said Robbins, originally from Livingston. “When I learned about the opportunity to get some research funding from WSSA and present my research at their annual meeting, I immediately wrote a proposal.”

Robbins’ research focused on ventenata, or wiregrass, an invasive grass that grows in rangelands and natural areas and forces out more desirable native species. It is similar to better-known invasive species such as cheatgrass and medusahead.

Working with Lisa Rew, a professor in the Department of Land Resources and Environmental Sciences and a researcher in MSU’s Weed and Invasive Plant Ecology and Management Group, Robbins began collecting GPS data to map where wiregrass had already taken hold in Gallatin County. She then combined that data with elevation models and other elements of the county’s geography to determine where the grass was most likely to continue to spread and which areas seemed more protected.

“The project consisted of collecting that field data and then determining trends, seeing what terrain attributes were consistent with the presence or absence of the weed,” said Robbins. “Then we can put it all together to predict where it may invade or continue to spread.”

After high school, Robbins spent five years working before deciding to pursue a college degree. She began her time at MSU as a Gallatin College student, where she found herself intrigued by her first plant biology class.

After a year at Gallatin College, Robbins transferred to the main MSU campus began work in Rew’s lab, beginning the wiregrass project during the summer of 2019. She presented her work at the WSSA’s annual meeting in Hawaii in March, where she was awarded the $2,000 research award.

“It’s a competitive award, so it’s delightful that she got it,” said Rew. “She did a great job doing the research and she really took it on as her own project. Stacey is very deserving of this honor.”

Back home in Bozeman, Robbins was also recognized with the Land Resources and Environmental Sciences department’s outstanding senior award, nominated by faculty across the breadth of her program. Professors Rew, Cathy Zabinski and Stephanie Ewing all put her name forward for the honor.

“I think it speaks to how diverse a student and researcher Stacey is that she was nominated by a plant ecologist, a restoration ecologist and a soil specialist,” said Rew. “Across the board, we all think she’s just great.”

With Robbins’ undergraduate career complete, she hopes her project will provide resources for other students to further their studies. She will put her years of hard work to use as she transitions into a position as a wetland field technician in Bozeman, a change for which she feels well prepared through her university experience.

“When I finished high school, I didn’t really have a college gameplan,” she said. “Starting back in a small classroom setting at Gallatin College was a really good way to get reintroduced to learning. Through my time at MSU I’ve come out with such a great support crew. The connections I’ve made have been amazing.” 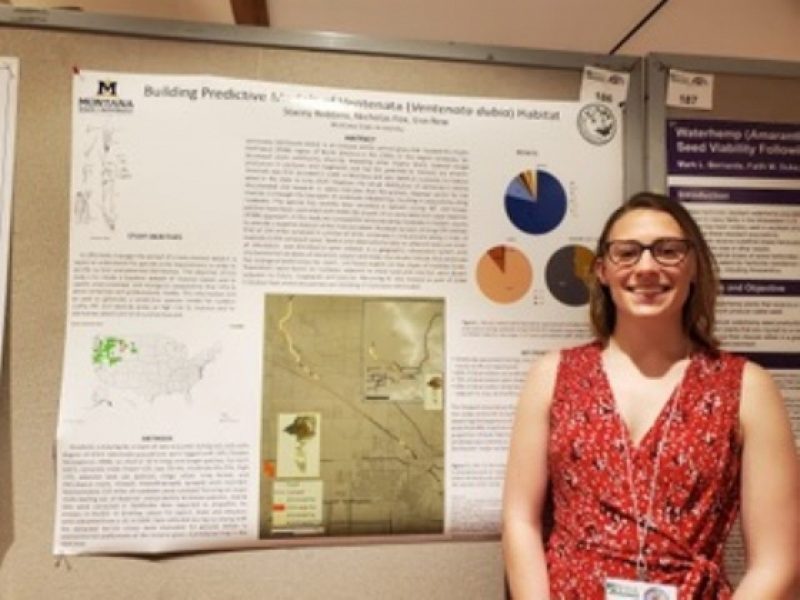