Funded by a grant from the National Science Foundation’s Division of Environmental Biology, a pair of Montana State University researchers are setting out to prove caddisflies are more than fish food.

“They play other really important roles, like processing nutrients, influencing streambed flow regimes and providing habitat for other things living in the streambed, like microbes or other invertebrates,” said Lindsey Albertson, an assistant professor in the Department of Ecology in the College of Letters and Science at MSU.

Albertson and collaborator Geoffrey Poole, a professor in the Department of Land Resources and Environmental Sciences in the College of Agriculture, were awarded the $1.17 million NSF grant in January. The grant will provide three years of funding for their research into how these aquatic insects influence the streams in which they live.

“This is an excellent example of inter-department and inter-college collaboration to further our understanding of aquatic ecosystems,” said Diane Debinski, ecology department head at MSU.

The collaboration began after Poole attended a presentation given by Albertson as a means to introduce himself to a new colleague who, although from a different college on campus, also specializes in aquatic ecology. Albertson was talking about net-spinning caddisflies and how their activity binds together stream-bed sediment. Caddisfly larvae spin and tend silk nets, not unlike spider webs. These caddisfly webs, however, are in water and catch tiny organic particles rather than insects. They aren’t big — usually a half inch or less — but a square meter of streambed may be home to hundreds or thousands of such nets.

The little nets were fascinating for Poole. With a background studying groundwater hydrology, his mind immediately went to how they would change the streamflow. “That’s changing the way water moves in the system,” he remembers thinking. “It has to be.”

Albertson, who had been researching the insects in terms of how their nets influence sediment movement and habitat creation for other organisms, hadn’t measured their effect on the water’s flow in the stream bed. When Poole approached her about working together, Albertson was thrilled at the chance.

“If these net-spinning caddisflies are influencing flow, then they should be influencing the streambed community,” Albertson said. “That got me really excited, because I’m a community ecologist.”

The pair set out to collect preliminary data to support their hypothesis — that the tiny nets created by larvae could influence the water flowing through them — working for two years with graduate student Michael MacDonald to demonstrate that caddisfly nets were able to slow the flow of water within the sediment and are therefore likely to have other influences on the system.

With the grant, approved by the NSF after the preliminary data collection, Albertson and Poole are seeking to understand how nutrients and organic matter are processed within a stream and the associated role of the caddisflies in that system. Caddisfly nets create a completely novel habitat for microbes within the stream sediments and boost the overall prevalence of the microbes, Poole explained. The increase in microbial biomass then affects the rate at which nutrients and organic matter enter the streambed, the amount of time they spend there and the capacity of the stream to process them.

According to Albertson, caddisflies remain in their net-building aquatic larval stage for 10 to 11 months, then quickly transition through the pupal stage to emerge from the water as an adult caddisfly. The entire life cycle is about a year.

Mayflies, stoneflies and caddisflies are often used to monitor stream quality in an index named for their scientific family names: Ephemeroptera, Plecoptera and Tricoptera, or EPT. An abundance of these insects is an indicator that the stream is healthy.

The research will take place both in a lab and in field sites. In the lab, water will circle continuously around a device known as an annular flume, which mimics water moving over a stream bed. The researchers can add the caddisfly larvae collected at area stream sites to the controlled system to measure changes in flow in different situations. They will then test the same ideas in the field within enclosures on Cherry Creek west of Bozeman.

The work will combine the two researchers’ skill sets. Poole is a veteran researcher who often works in computer modeling of stream networks. Albertson’s work with macroinvertebrates and their place within freshwater ecosystems often takes her into the field.

“You think about those ideas you wish you could pursue or you wish you had all the skills to accomplish, but most scientists don’t have everything and that’s why working with someone who has that complementary skill set can be really, really fruitful,” Albertson said. 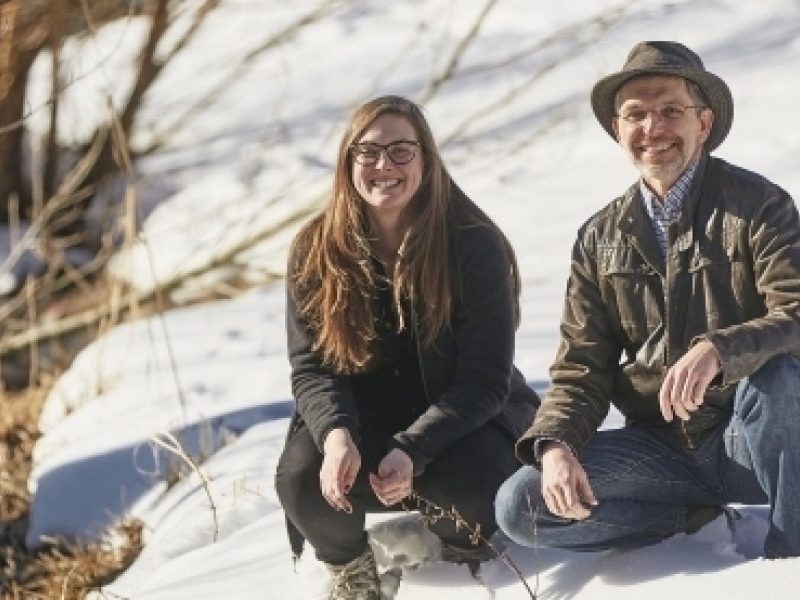